I’m going to talk about a trip I took a little while ago to Hack Green Nuclear Bunker. Dotted around the country are various locations like Hack Green that have made the transition from nuclear shelters to tourist attractions. It’s an uneasy, not to say ambitious transition. And that’s really what I want to talk about – the challenges thrown up by a thermo-nuclear armageddon theme in the context of a family fun day out. 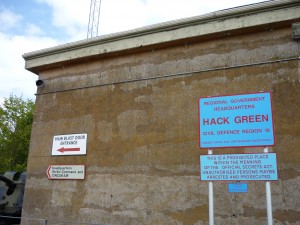 Hack Green is in Nantwich, Cheshire. It started life as aWW2 radar bunker and was later converted into one of 11 Regional Government HQs that would I suppose run what was left of the country in the event of nuclear attack. It became operational in 1984 and is the usual vast underground complex, containing its own generator, water supply, fallout rooms, communications etc. All the support services needed for 135 civil servants and military personnel to survive a sustained nuclear attack. Or as the website puts it: ‘Hack Green stood ready… to play its part to oversee the survival of Cheshire and the government, post nuclear war.’

I think when opening up these historical sites to visitors, particularly ones concerned with disturbing or harrowing episodes in history, tone is very important. I’d say the tone you pick up quite early on in a visit to Hack Green is enthusiasm. And that’s nice in some ways, but also quite unsettling given the subject matter. There seems to be a certain relish at the prospect of nuclear apocalypse, with borderline gleeful accounts and images of the hideous carnage that would ensue. You find yourself getting caught up in the mood of it all – looking at posters about the radiating effects of bombs of varying megatonnage and thinking how strikingly designed they are. 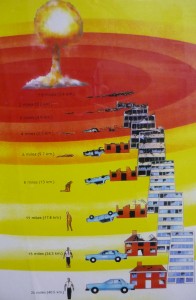 I guess if you’re a nuclear shelter, you have a vested interest in some kind of nuclear skirmish kicking off. That is your sole point. I found a regretful air of ‘if only’ pervaded Hack Green. I started to imagine the bunker as a sulky understudy. A bit cheesed off that the whole world hadn’t broken its leg and allowed it to fulfill its destiny. Pesky Gorbachev. 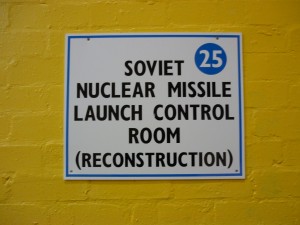 I like the ‘reconstruction’ there – just in case you thought the Soviets had a nuclear base in Nantwich.

There’s a lot to take in at Hack Green. All the administrative areas of the HQ as they were in the 80s, and then other rooms given over to displays of what I guess you could call nuclear memorabilia, or reconstructions of Cold War scenes.  I think they’ve had some fun with these reconstructions. Obviously, like a lot of these small visitor attractions, they don’t have a vast budget, but they haven’t let that stop them going for a kind of post apocalyptic Madame Tussauds on a shoestring effect. 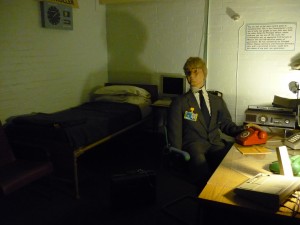 I’d like you to notice in particular the attention to detail in this tableau. The mannequin’s ID badge displays a photo of the mannequin. You have to applaud touches like that. 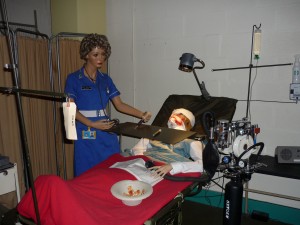 I found myself feeling sorry for the mannequins. Standing in the window of Foster Brothers, in his halcyon, acrylic heyday, I don’t suppose Carl here ever foresaw this radiation sickness tableau ahead of him, covered in bloodied dressings and lesions. And what must Tiffany be thinking?

Despite the home made nature of some of the displays, Hack Green can’t and doesn’t fail to be a chilling place. The neatly laid out offices deep underground combine the poignant, the banal and the grotesque. The idea of 135 civil servants calmly going about their business running Cheshire from beneath the ruins is a dark fantasy. 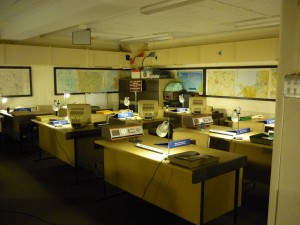 Still – it’s not all doom and gloom. In turning a nuclear bunker into a family fun day out the proprietors have kept in mind the need to make armageddon fun for the little ones. ‘Kids have fun too!’ insists the website. And so we have ‘Spy Mice’. Toy mice of various shapes and sizes, dotted throughout the site for children to spot as part of  ‘The Mouse Trail’. 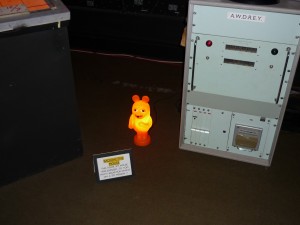 That’s Radioactive Mouse – I don’t know if you can read the card but it says: ‘This poor spy mouse was exposed to too much radiation whilst on a spy mission’. Look at his face – he really looks poorly.

I guess the owners of Hack Green saw what a rodent had done for Disney, and thought ‘Why not nuclear war too?’ Some might say this stretches the crowd pleasing qualities of the mouse too far, and it’s true that the spy mice have a far tougher remit than Mickey, but the children there on the day I visited were so entranced by spotting the mice that they barely registered the fall out suits and Geiger counters they poked out behind.

In one of the undergound rooms you can sit and watch ‘War Game’ the 1965 BBC drama about nuclear attacks on Britain. The original programme wasn’t transmitted until 1985 as it was considered too horrifying. As I was watching it, a man came in with his son who was about 8 years old. There was a sign on the door saying the film wasn’t suitable for children, but I guess once you’ve seen the rest you get a little blasé. They were just in time for the scene in which an exhausted doctor explained that category 3 casualties were the hopeless cases left in a holding section to die in pain without drugs. A broken looking police officer with a gun in his hand then works his way along the line, shooting each of the casualties. I’m not sure what the young boy made of all this, but if I was a spy mouse I reckon I’d resign. 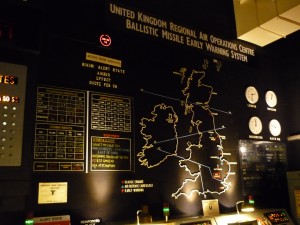 The strangest thing about the visit for me was the massive sense of recognition I felt. I was a teenager again growing up in the 1980s with the absolute conviction that nuclear armagddeon would happen any day. This never seems to get picked up on in popular remembrances of the 80’s  – it’s all synth pop, geometric hair and Pacman, but the perceived enormous threat of nuclear war is often overlooked.

I remember often dreaming about nuclear attacks and obsessing about the four minute warning, working out exactly what I’d do when the siren sounded. In a big city like Birmingham it was easy to mistake random urban sirens (particularly, I seem to remember, one that came from the Cadbury factory) for the signal that we were all about to die. I wanted them to make the real siren more distinctive. I thought Rimsky Korsakoff’s ‘Flight of the Bumblebee’ would be a good choice. As well as avoiding confusion this would really ramp up the urgency and panic of those frantic last moments – turning it all into a hilarious slapstick comedy.

Without visiting Hack Green I might have misremembered all this as exaggerated teenage paranoia, that childish conviction that the people running the world were a) insane and (b) couldn’t give a fuck about me, but no, Hack Green reassures me, it turns out it was all true.